Bacome Insurance Agency was started by Milton K. Bacome in 1946 as a small personal lines agency. By the early 1960’s Milt had expanded to write insurance for local farms and dairies. Having been in the business successfully for 25 years, Milt was looking to move into retirement and found a partner and successor in 1972. Dallas Hakanson joined Milt as a partner in 1972 and in 1973 brought his brother-in-law Gerry Thompson into the business. Later that year Milt Bacome retired fully from the business leaving Gerry, Dallas and Kay Evans in their original Grangeville Blvd office.

Gerry and Dallas set about to grow the agency. Their first move was to bring their brother-in-law LeRoy Berrett to Hanford from Utah as a partner. LeRoy was working as a general manager for a national construction firm. His wry sense of Humor and ability to talk made him a perfect fit for insurance sales. Gerry, Dallas and LeRoy began their campaign of growth. As local farming operations expanded and grew more complex, the partners recognized a need and opportunity to specialize in Ag insurance for farms and dairies. They were among the first to offer Ag insurance packages which combined all the farmer’s insurance coverages on one policy. They also focused on the growing dairy industry, as dairymen moved their operations from Southern California to the Central Valley. David Gomes , David Silviera and Pierre Bachoc joined the agency as producers and formed a dairy specialist group called Agpro Insurance. Through this specialization and targeted focus, Bacome Insurance Agency has become one of the largest dairy and farm agencies in the Central Valley.

Through the Late 70′s and early 80′s Bacome Insurance Agency was growing. The Ralph Green & Tom Haydock Agencies of Hanford were purchased and by the late 80′s Bacome was growing out of their small two room office on Grangeville Blvd. Along with others from the community they purchased and renovated the Old Laundry Building on 7th Street. Bacome had grown from a small one person agency to an agency with 14 employees, 6 producers and 3 owners.

In 1983 the brother-in-laws were looking for a new partner, and they found him in Gerry’s cousin Paul Thompson, who had previously served has a pilot in the U.S Airforce and was working in the insurance industry in Utah. Danny Todd, a life-long Hanford resident, began working for Bacome in 1988 as a full-time producer. Having been recongnized as one of Hanford’s best agents, Danny Todd was made a partner when Dallas Hakanson retired in 1991. 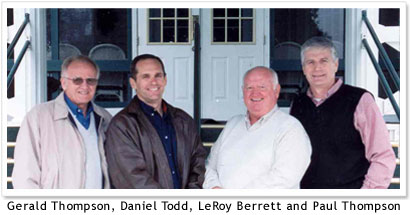